Day two and further into and we are further into Northern Ontario where there are trees, trees, and a couple more hundred thousand trees. Also a few rocks. We stopped in White River and got pictures with a Winnie the Pooh statue, it was the birthplace of Winnie the Pooh. The further we drove, the less hilly the land got. 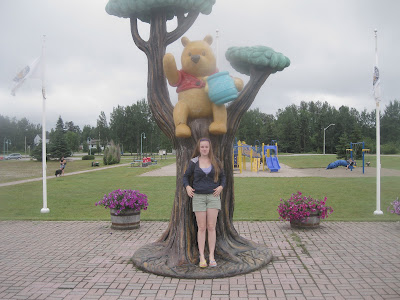 There were some neat spots where the trees had all burned down and you could see the burned trees and the new trees growing between them. We had initially planned on stopping just before the border, but we were making good time so decided to just keep on driving. We, of course, got a picture underneath the Manitoba sign.

Night two we stayed at West Hawk Lake, which is just like the camping provincial parks in Ontario. It was only 11.55 a night, which was just the right price! We set up our tent and since it wasn't dark yet we decided to tour around. We went down to a little beach spot, and then followed a little trail that looked like a deer trail around the outside of the campground. Toby loved the freedom of being outside! He would go ahead a little bit, sit and wait for us to catch up, and then keep going. There were some pretty amazing lookout spots! When we were walking up the path we seen a fox, which is pretty exciting because they are by far my favourite wild animal and I had never seen one before! The first time we seen it, it ran scared. We seen it a few minutes later eating some wild berries, and it sat and looked at us and looked like a cute dog. After a couple minutes It got bored and walked off.

Got back to the tent just before it got totally dark, jumped into the tent and settled in for the night. Moto got the car to herself and Toby stayed with us and kept us warm. It was a pretty rocky spot, and a freezing cold night, but feeling relaxed from being out of the car and knowing we were safe I fell asleep instantly, Braden not far behind!
Posted by Jessie-Mae at 4:53 PM