A thing or two has happened since last I posted a post. And also since we arrived at to the Island. Hopefully I can briefly summarize all the small attractions, so you don't miss anything but also aren't stuck feeling compelled by family/friend obligation to spend the whole afternoon reading the whole dang thing.

One of our first stops after we got here was Nymph Falls. Ontario has much to offer, and much to see. All the forests and hills and rocks and rivers so on and so forth. But we really were not totally sure of what to expect when we got out of the car (after getting lost a few times) and headed into the mossy forest. We wandered around the paths in what seemed a lot like a maze. We were yelled at by a resident squirrel ( btw: one of the only squirrels I have seen since we got here), apparently he didn't like us very much. We followed the paths mostly at random, but also towards the sound of running water. You know when your watching cartoons, and something unexpected or surprising happens and the character's chin drops to the ground? That's the best metaphor I can thing of to how it felt when we seen the water. Clear. Imagine the clearest water you've ever seen, then imagine that was dirty water compared to this water. Glacier water. Not something I had ever seen before. You can see straight down to the bottom, and it looks like its only a foot away but really its 8 and 9 and 15 feet away. Deep, and there are man made staircases in the water for the salmon in the fall to make it up the river. All through the water are almost perfect circles of all different sizes, that are all naturally corroded away over time. This was last summer, so it was filled with people. Swimming, tanning, probably a couple people having a few drinks. We decided, in our infinite wisdom, that we should walk up through the river a ways. Keep in mind of course that I had my dads very expensive camera, and a dog who is mortally terrified of water, and its really really slippery, most especially when your walking against the current trying not to fall into any the beautiful circle holes I previously mentioned. A terrifying hour later we finally made it back to the shoreline and crawled up to safety, Toby way ahead of us. The cuts and bruises were worth the cool view, though I don't know if Braden would agree. We took our time as we wandered back out of the woods, walking along trails, seeing all the mountain biking mini bridges and whatnot. A good day. And definitely a good choice for our first real BC adventure. It helps also that its only about 15 minutes, if that, from our house.

The Wacky Woods. It truly is a wacky place. Braden heard about it at work. It's one of those places that exists but it only know about from word of mouth. Not an official place. But that makes it a whole lot cooler. We have actually been there twice. The first time, it was fall, and it rains a lot here so it was super muddy. Which Toby loved of course. Its in the back yard of the artist, but moves through the woods and onto a nearby provincial path. Most of it isn't technically his property, but its a very neat place to go. It's very hard to describe. There are little statues, painted rocks hanging from trees, curtains, books in trees with phrases in them, wheels and faucets in trees. Most of it was metaphors for how people should be one with nature and anti-corporationalism (if that's a thing), I didn't understand a lot of it, but from what I got, people were portrayed as rocks. Anyways. A very colourful and  interesting place. The second time we went was because I wanted to see it again, and also there was a geocache (more on that subject after) in it I wanted to log before we left the island. While we were walking through it we made our way to a section we hadn't seen before, which led onto the path, and as we walked up the path there was house numbers on one of the trees, ad if to imply it was someones property. Obviously Braden took this as a personal invitation to walk through the property, which turned out to be an extension of the wacky woods ( or at least we are under the impression it is). It narrows into a little path, that goes out onto an estuary, I think that is what they are called. When the tide is in, it is covered in water. By chance the tide was out so we got to walk out pretty far, and got to see the Oyster boats from a different angle, which is a lot cooler than it sounds like. I also got a great picture of a little crab, but Braden got a better one. When we went back to the path, we found another geocache in the middle of a forest, it was hidden in a really old backhoe, and honestly I don't even understand how the thing got there, its completely surrounded in big old trees. Good times. 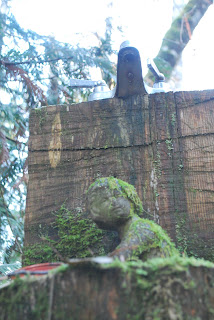 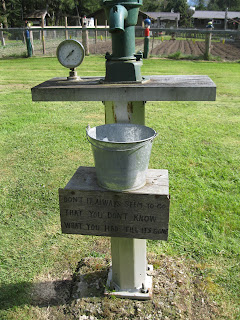 Hold in just a little longer guys. I swear I am almost done. Something we have added to our mini-adventures is geocaching. As I am terrible at actually giving accurate descriptions of things I googled the word to define it for me. Dictionary.reference.com defines it as: the outdoor sport or game of searching for hidden objects by using Global positioning system (GPS) coordinates posted on the internet. So basically. All over the world ( Germany, Italy, anywhere you can think of including Perth ON) has this on-going game of hide-and-seek going on. Awesome. When you can't find it frustrating. Sometimes totally satisfying. Sometimes they are just on a path, sometimes you have to go out of your way to find it, and it turns out to be an awesome view of something you otherwise may not have seen. There in one on mainstreet downtown Courtenay attached to a street light pole, and unless you knew there was something there, you wouldn't never even think it may not have been part of the pole. Ranging in size from the size of a watch battery to sometimes bigger than a car battery, they are hidden, sometimes hard and sometimes easy to find. It makes me feel like I'm not alone, it makes the day more exciting sometimes, and sometimes it just gets you out of the house. I love it. So if you see me referencing geocaching this is what Im talking about.